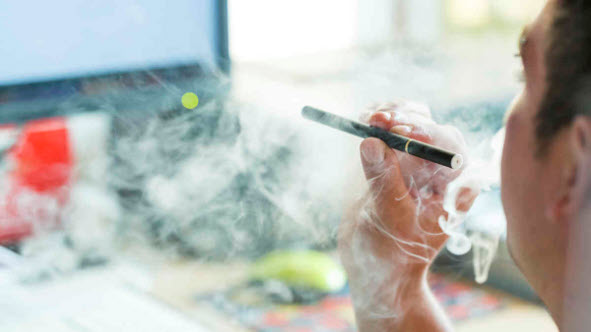 Vaping is the inhaling of a vapor created by an electronic vape pen, e-cigarette, or other vaping devices. Vaping produces less nicotine as compared to smoking cigarettes or cigars. Due to the negative effects of smoking on both smokers and secondary smokers, most organizations and institutions have prohibited public smoking by designating smoking areas. Having said that, vaping is mostly practiced by people wanting to quit smoking or people who are avoiding heavy intake of nicotine through cigarettes. This article gives tips about what should be your attitude towards the use of vaping in the workplace.

1. Be aware of your environment

Smoking or vaping should be avoided in some surroundings. For example, if you are a medic working in a hospital, you understand most people admitted in hospital wards have low immune due to their various illnesses. Therefore, their environment should not be disturbed by anything that may compromise their weak bodies. It’s highly advisable not to do vaping in such surroundings.

Also, an area with young children like a kindergarten school or a playground is automatically a no vaping area. It is irresponsible and harmful to smoke or vape in such an area. You also cannot vape in a work area with highly flammable material and explosive devices.

2. Understand the laws that govern your area

Some buildings have signboards indicating that the area is a no smoking or vaping zone. Such places are likely not to allow vaping owing to the fact that vaping has a share of nicotine released into the environment. Therefore, in case you need to vape regularly you can inquire from the building management on the designated areas for vaping.

Most area laws prohibiting smoking have no reference for vaping laws; however, if you are in an area that prohibits smoking, you should inquire to avoid finding yourself on the wrong side of the law. This is because most people regard vaping as normal smoking and have no idea of the difference between the two.

3. Talk to your employer

Today, around 11 million U.S. adults use e-cigarettes; usage is highest among adults aged 18 to 24. Another way to also go about vaping safely in the workplace is to talk to your employer. If it’s not allowed to vape in the office then they may allow you short break to go to a designated area where you can vape. Such an agreement ensures that your rights are considered and respected.

You could be working around a small number of co-workers and perhaps you can talk to them and get to know if they mind you vaping indoors in their presence. Their response will determine your decision of whether to vape in the office or outdoor. However, you may be required to do it more often as you receive new workers now and then. By all means, your vaping indoors should not affect your co-workers negatively.

5. Be mindful of others health

It goes without saying if you have a co-worker with an underlying health condition, like asthma, then you should never vape indoors. Also, you could have co-workers who have recently succeeded in controlling their smoking habit. Hence, vaping around them could cause them to relapse and lose their gains. Therefore, you should be considerate before vaping in the office. Get to know your co-workers well and respects their thoughts and concerns regarding you vaping in the workplace.

Vaping at the workplace can be tricky, especially if you are working in an open space area with many people. The sight of smoke filling the air could be agitating to most people and a health risk to those with underlying health issues. However, it’s a different story for those designated with closed-door offices. They can choose to vape when they have less or no movement in and out of their office or during tea and lunch breaks when they don’t expect human traffic. Most people that vape says they are working towards zero smoking. Vape before you get to the office and after your office hours. Hence, you achieve work throughout the day without vaping indoors.