Do Edibles Give You a Different High than Smoking Cannabis? 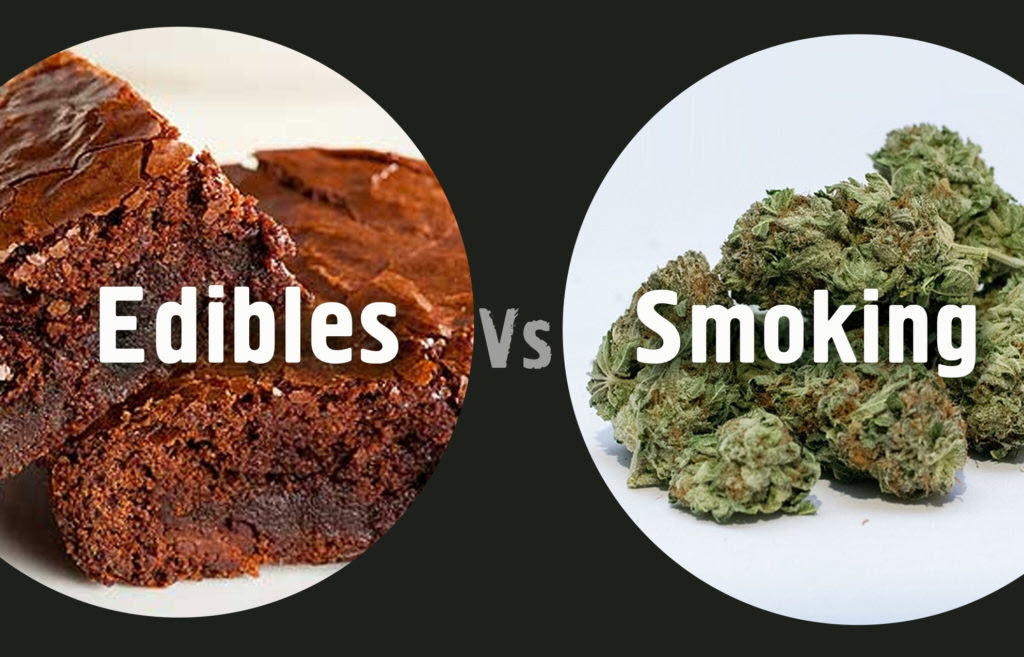 There’s no question the cannabis industry has come a long way. Back in the day, your weed roll would come in the form of a joint, a blunt, spliff or a vape pen. If that didn’t give you a kick, there was always the bong for those who preferred their marijuana filtered. The pot brownie was, arguably, the step change that introduced us into the world of cannabis edibles, and since then consuming weed products hasn’t been the same.

Thanks to a wide assortment of cannabis edibles, you can now experience fine dining on a wide assortment of foods: pasta, pizza, different kinds of desserts, candy, chocolate – you name it. Then of course there’s vaping which has revolutionized the way we inhale cannabis and created a much safer way of consuming it. Whatever your preference for consuming cannabis is, the industry’definitely got you covered.

How smoking affects your high compared to ingesting cannabis

To understand how smoking versus ingesting marijuana affects your high, you must appreciate that the two methods have different ways of delivering THC, the psychoactive compound in cannabis, into your system. Let’s not forget there are other factors that come into play as well like the strain of weed you’re using, the CBD to THC ratio, terpene profile, your body weight, your tolerance, and how much you’ve eaten before taking a hit.

When you smoke weed the effects are fast but short-lived. That’s because THC is quickly absorbed into your bloodstream via the lungs before being taken up by the endocannabinoid receptors in your brain. You’ll start feeling its effects in 2 to 10 minutes, but in an hour or two your high will have worn off.

Edibles, or food products that have been infused with marijuana, can get you just as high as smoking weed if not more. Ingesting marijuana introduces cannabinoids into your digestive tract where they’re eventually absorbed by the stomach. They’re then metabolized in the liver, where THC changes into 11-hydroxy-THC, a more potent version of THC that sticks around longer in your system.

Since edibles pass through the digestive tract and liver before they’re absorbed in the bloodstream, it takes a longer time for the THC to hit your brain – anywhere between 45 minutes and 3 hours. However, once its effects kick in they’re more intense than when you smoke marijuana.

Comparing effects of smoking vs edibles

The greatest challenge with cannabis edibles is that it’s not easy to determine the right dosage to use. After all, THC concentrations differ from one weed product to another depending on the quality of cannabis used and the method of preparation.

Since it takes a while for the effects of THC to kick in when ingested, some people get fooled into thinking the edibles aren’t working. This can lead them into taking more edibles and unintentionally increasing their dosage, thereby prolonging their high. To avoid this rookie mistake, you’re best off starting with a low dose and waiting for at least 24 hours before taking any more edibles. Make small increments of 2.5 to 5 mg every 24 hours until you hit your sweet spot.

With smoking, you’re less likely to have problems of overconsuming – unless you want to, of course. That’s because smoking cannabis gives you an opportunity to judge its effects in real time, and adjust your consumption accordingly.

Pros and cons of smoking vs ingesting cannabis

Smoking marijuana provides a great way to unwind after a long day at work for those looking for a quick pick-me-up. It’s also very effective for patients who take it to relieve chronic pain or discomfort, and can’t afford to wait for an hour or two to start enjoying the effects.

That said, ingesting cannabis is healthier compared to smoking because you don’t get tar and other carcinogens into your lungs. Of course, you could always try using a vape pen as a safer option, seeing as you get a purer form of smoke because it vaporizes the cannabis without actually burning it.

Can you eat raw weed?

Sure you can, but it doesn’t produce the same effects as ingesting conventional edible products. That’s because cannabis is only activated when it undergoes a process called decarboxylation. For this to happen, THC and its less psychoactive cousin CBD must be heated, which is what happens when you bake the edible products.

Can you overdose on cannabis?

You most certainly can overeat cannabis edibles, resulting in a long and miserable high, but cannabis has never been known to cause a fatal overdose. Unlike opioid and alcohol-induced overdoses which can shut down the body’s breathing and circulatory systems, marijuana cannot. So, yes, you can overdo marijuana and get too high but you can’t die from a cannabis overdose.

Verdict: which creates a better high?

It really depends on the user. If you want a hit with instant effects as opposed to being couch-locked for the entire day, then smoking would probably be more of your thing. When all is said and done, you get the same high, milligram for milligram, when you inhale cannabis compared to ingesting it. It’s the way the psychoactive compounds work in our system that makes the difference.

At LiT we’re always hard at work looking for the right assortment of cannabis products to meet our clients’ demands for safety and quality in their vaping experience. Order now for the highest quality THC & CBD Cannabis Vape Pens, edibles, flower, concentrates and other products guaranteed to give you the smoothest customer experience.